I first became aware of Michael Crichton’s story “The Andromeda Strain” through the 1971 film starring Arthur Hill, David Wayne, James Olsen and Kate Reid. Having seen the film, I wanted to read the book, and was not disappopinted with it! I’ve just read it again about thirty years later – it was still as engaging as I remembered. The story revolves around the recovery of a crashed satellite from ‘Project Scoop’. Scoop was designed to recover novel (bio warfare?) organisms from low-Earth orbit. When the Scoop VII satellite suffers a malfunction it has to be brought back prematurely. The military track it to a small, isolated town in Arizona called Piedmont. They find that everyone there is dead except for an old man and baby. The team they send in to recover the satellite are quickly killed as well – Scoop VII has brought a nasty organism back to Earth and the ‘Wildfire Team’ are activated. 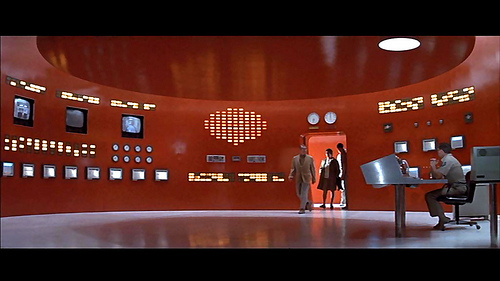 Wildfire’s job is to examine the satellite in a secure bio-lab facility, classify how the deadly organism functions, and then find a cure for it. The facility reminded me of an underground Titan missile base. Once the team have travelled down to Level V, being increasingly decontaminated as they descend, they are essentially cut off from the surface with only computers and machines linking them to the outside world. Wildfire is clinical, clean, cold and dispassionate. The opinions of the computer programs come faster than the humans could form them and are unchallenged. The message is clear: technology can fix anything if the smartest people are using it.

Wildfire has been fitted with the ultimate fail-safe of a nuclear bomb that will automatically vaporise the facility if the computers detect that the bio-containment seals have failed. Only one unmarried man is given the key that could deactivate that bomb: if the alarm sounds he will have three minutes to decide whether he should stop it.

“The Andromeda Strain” is definitely a product of its time, blending Cold War secrecy and militarism with all the technological capability that America’s military-industrial complex could develop in the 1960s. Both the book and 1971 film feel claustrophobic and dispassionate; the survival of the team, the general population of the USA and even the world, will be determined by the unsmiling efforts of science. The scientists are compartmentalised both by their specialisms and their security ratings. They are progressively isolated as they descend through layers of decontamination, most of the Wildfire’s infrastructure is automated and communication is electronic, impersonal.

Using a vast array of computer-driven tests, the team eventually discover the Andromeda organism. Andromeda seems to be able to directly convert energy into matter without the need for digestion or respiration. It has a crystal structure and grows without DNA, RNA or any amino acids. It has also evolved into a form that can destroy (digest?) plastic-rubber. Although not lethal in that form, it escapes from confinement and the nuclear fail-safe is activated. The team realise that if the bomb detonates the energy released will probably result in Andromeda taking over the Earth – the story ends with them trying to avert that crisis. which I am not going to spoil here!

I really enjoyed re-reading The Andromeda Strain. It is a bit slow and by today’s standards the technology is over-explained… we’re all used to the ideas of computers and electron microscopes now. Some of the technology like the use of tele-printers has dated the book, but this took nothing away from the story.

Whilst I have enjoyed both the original book and 1971 film, unfortunately I must add that I did not like the 2008 mini-series – it felt much too slow and ponderous, which is saying something for this story!

Often having a Cold War influence, my stories explore desperate situations that take people to their physical and emotional limits. Find me on Twitter as @LeeJ_Russell or at leejrussell.com View more posts