I first encountered this story as the TV serial that is advertised on the front cover. To my childhood eyes it seemed quite possible for Britain in the late ’70s and early ’80s to collapse into the anarchic state being shown.

Five years of Labour Party governance (Harold Wilson in ’74 – ’76, James Callaghan in ’76 – ’79) had brought the country to its knees. Callaghan had a tiny majority in Parliament and faced rampant Trade Union strikes that came to a head in the ‘Winter of Discontent’ (Winter ’78-’79) – I still remember eating cold food by candle light because of power cuts. Public employees were walking out leaving food and fuel undelivered, rubbish uncollected, and bodies unburied. No government that can’t feed its people or bury the dead can survive, and Callaghan was ousted by Margaret Thatcher’s Conservatives on 3rd May 1979.

Thatcher was a completely different kind of political animal. Out went Keynesian economics, massive Public Services and a huge State apparatus. In came Monetarism, a priority on controlling inflation over unemployment, social conservatism over liberalism. There was a belief that through entrepreneurialism people could quiet ably look after themselves, and success came to those who worked for it. Thatcherite economics may have been a necessary readjustment to the UK economy but the means by which that was achieved were egregiously exclusive: London, the financial sector and certain parts of the South-East were favoured. The industrial Midlands and North were abruptly deemphasised, downsized and essentially scrapper. Strikes by the coal miners represented just the tip of resentment Thatcher’s government created with ‘ordinary people’ (i.e., anyone not loaded with cash or privilege). Whole families and communities were devastated by these changes being forced on them without a proper compensating programme of investment in their futures. On the council estate where I grew up things felt electrified, ready to explode at the wrong word. Violence and Vandalism went hand-in-hand, and only ‘getting a [rare] good job’ was going to save you from the unemployment line (I was very lucky in that regard).

These kinds of feelings are the foundation that Kneale built his novel on. He had previously written three stories for television starring Professor Bernard Quatermass (1953, 1955 and 1958) and some film versions were subsequently produced.

Quatermass is a quintessential British scientist of the post-war era, smart but somewhat dour, somewhat ‘Establishment’ but out on the edge. In this final tale in the Quatermass quadrilogy, the Professor is searching for his grand-daughter, Hettie, across the ruins of the country. The UK, and the wider world at large, have slumped into social and economic collapse, and he sums it all up in a few sharp sentences during a TV interview at the start of the book:

“. Two super-powers, full of diseases – political diseases, social diseases, economic diseases – they’ve got them all – and their infections are too strong for us, the small countries! When we catch them we die! …”

All the young people are either being drawn into a hippie cult called the Planet People, or into violent gangs who fight to the death and celebrate killing with sex. 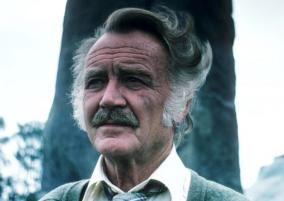 The Planet People gather at historically symbolic meeting sites (mostly stone circles) in the belief that they are going to be ‘taken to the Planet’. Quatermass witnesses a group of Planet People being destroyed by a beam of light that turns them into a crystalline ash. He investigates what has happened with the help of other scientists and eventually discovers that the young people are being harvested by an alien force.

The final conclusion to the story was unsatisfying for me, and the use of a 35-kiloton nuclear weapon with a focussed charge felt like too much of a McGuffin. Those closing scenes did not spoil the story overall, but I did feel that Kneale missed the mark there.

== The TV version (starring John Mills) was broadcast in four parts in October-November 1979 and is currently available on Blu-ray and DVD.