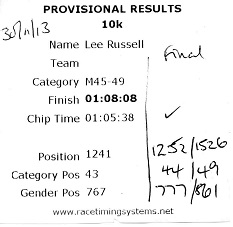 I enjoy running for general fitness an relaxation. I don’t aim to run competitively against other people. Rather, I like to see how my personal fitness varies over time.

But when the opportunity to take part in this charity run for Men’s Health in the UK, I thought “why not?”

So at 7:00 this morning a team of three of us from work headed up to London to ‘enjoy’ the run. The photo shows me just before the race.

We all got to the end and completed an unexpectedly taxing course. Greenwich Park sits on a slope facing the River Thames, across from the Isle of Dogs. The downward sections were fairly steep and of course, what goes down must go up! (sorry Mr Newton)

With a very cold wind blowing up from the Thames it was a hard run but I was pleased with my time: 6 miles in 65.6 mins – 5.5 mph. That was a bit slower than my normal speed but not bad, given the terrain… and not bad for someone who was once told he couldn’t run again after rupturing some disks in his lower back – way to go!

Have I caught the ‘race bug’ from this? Probably not: the ‘atmosphere’ didn’t add much to my fun (but the company did) and my overall position in the race is largely unimportant, as I’m not bothered about being faster than ‘Mr Jones’. Still, I might run again for charity, let’s see next year.

And what were my overall results, do I hear you asking?